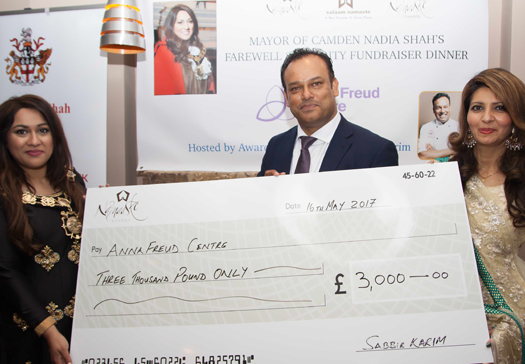 Raising £3,000, the event signalled the last public engagement for Cllr Shah, who will be stepping down as Mayor.

One of the highlights of the evening was when Cllr Shah raised £150 by agreeing to sing the Bangladeshi song “Benge Mor Gorer Chabi”.

A further £1,200 was raised through the auction of a three hour canal trip for 12 people on the Regent’s Canal, as well as ticket sales for the event.

The event was attended by members of the local British Bangladeshi community and Cllr Shah was joined by her fellow ward councillors, Cllrs Nasim Ali and Heather Johnson.

Cllr Parvez Ahmed, the Mayor of Brent, was also present.

Award winning chef and owner of Namaaste Kitchen, Sabbir Karim, said of the evening: The event had two objectives. Firstly, to celebrate Nadia Shah’s tenure as Mayor of Camden over the past year and to thank her for her tireless work in the role.

Secondly, it was a final opportunity to raise funds for Nadia’s chosen charity, the Anna Freud National Centre for Children and Families.

The charity has 60 years experience of pioneering mental health care for children and families.

Their mission is a world where children and families are supported effectively to build on their strengths and to achieve their goals in life.

It was very gratifying that we were able to take Nadia’s fundraising total to £75,000.

This was a superb achievement. Namaaste Kitchen is an award winning & critically-acclaimed modern Indian restaurant in Parkway, NW1.

Sabbir Karim has drawn on his travels around the world to develop the restaurant’s contemporary, yet gourmet, Indian and Pakistani cuisine.  Namaste has received glowing press reviews as well as being winner of “The Best Asian & Oriental Chef of the Year” & “The Best Newcomer 2012” at prestigious Asian Curry Awards.